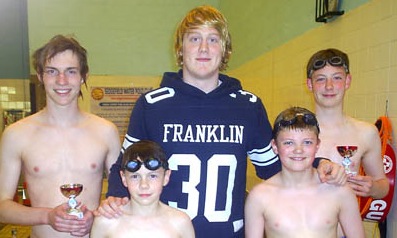 edgefield Water Polo Club held their Player of the Year Awards for the 2010 season at Newton Aycliffe Leisure Centre.

Scott Carpenter Sedge-field?s profesional Water Polo star, who is playing in Barcelona for Terrassa, was at home to present the awards due to a foot injury which has kept him out of the water.

Once again Mathew Calvert (16) was named overall Player of the Year for a really great 2010. Unfortunately Mathew wasn?t available to recieve the award as he was leading GB Juniors in the European qualifiers in Lithuania, where they defeated the home team, Turkey and Macedonia. Mathias Reichel (16) was named “Under 17 Player of the Year” for his great improvement during 2010. Under 15 Player of the Year was James Pratt (13) who has been to GB training for the Academy age group and shows a lot of potential for the future.

Under 13 Player of the Year was Connor Keeble (11) who has shown a great attitude in training and is a great prospect for the future. Khristopher Egginton 10 was named the “Best New Prospect”.