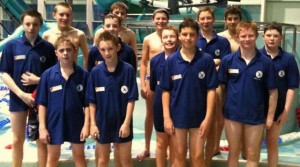 Sedgefield Water Polo Club came agonisingly close to being National Champions for the 4th time at the recent National Boys under 15 Championships in the Aquatic Centre in Manchester.

They were drawn in the toughest group which included first seeded team Manchester in their home pool and Sheffield number 3 seeds. Sedgefield were unseeded as they haven?t been in the National Champs since 2008.

Sedgefield played Manchester first and knew they had to beat the first seeded team as only the winners of the group went to the final. Sedgefield started slowly and went behind but goals from Josh Barrett put Sedgefield in front 2-1 at half time.

In the second half Sedgefield managed to stay in front, but with just over a minute to go Sedgefield conceded 2 goals due to some slack defence to go behind 5-4. With 10 seconds to go on the clock Joe Barker equalised to leave the final score at 5-5.

This draw meant that Sedgefield had to defeat the other 3 teams in the group to have a chance to reach the final. They played Croydon from South London next and were comfortable 8-2 winners with the goals being shared with Josh Barrett and Joe Barker.

The next game was against Champions Sheffield. A game Sedgefield had to win as Manchester had defeated them 4-0. Sedgefield were 1-0 down at half time after an ineffective period of play. It looked bleak for Sedgefield hopes when Sheffield were awarded a controversial penalty but Sedgefield goalkeeper Richie Howe made a great save to keep Sedgefield in the game.

Sedgefield?s last game was against local team Durham which Sedgefield cruised to a 17-3 with Jake Plant 11 scoring 3 goals on his debut at this level.

Manchester won all their games to leave them level with Sedgefield at the top of the group with 7 points but progressed to the final because they had the better result against Sheffield. It was even more frustrating for Sedgefield when Manchester easily defeated the second seeded team Birmingham in the Final 10-5. However it was a great performance once again by Sedgefield against all the big city clubs with their state of the art deep pools, while Sedgefield use shallow pools which isn?t condusive to playing in all deep pools in all Championships.