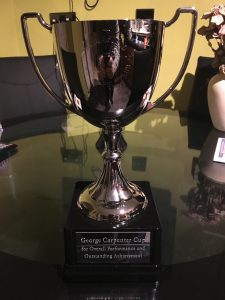 Our first Presentation night took place on Friday 17th December. It was fantastic to see players, coaches and parents together celebrating the club’s 20th anniversary, along with the successes of our members. Unfortunately, George Carpenter wasn’t able to attend to present the awards or to receive his Grey award from N&D. The club will meet up with George to present him with his anniversary gifts at a later date.

Trophies were presented to the following members. Photographs to follow…

Under 16 players player of the year
Jude Henderson

Under 12s players player of the year
Alex Boyer

Well done to everyone!