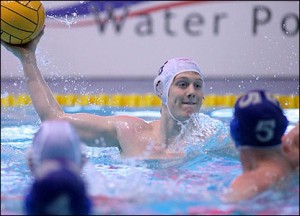 As soon as i arrived i agreed to play the final few games of the season for richmond tigers who had finished 4th in the victorian state league 1. this was to help gain some match fitness before the national league starts in january, and hopefully help the team in the finals series. we beat the team who finished 3rd easily in our first game, which meant we had to play the 2nd placed team. we beat them 10 7 in a tough game and secured our place in the grand final against the 1st place team. after an exhausting game i managed to score the winner with a minute to go in the final and we won 9 8. everyone was chuffed as it was richmond’s first state league 1 title in 8 years. it was a good game for me and i scored 4 goals.

The next week i flew to sydney as i had been asked to captain the invitational barbarians water polo team in the australian inter state championships. this is the highest quality tournament of the year in australia and is used to select their initial squad to work towards the olympics. there were teams from the 4 main states of australia, the new zealand and japanese national teams and the barbarians. the barbarians was a young team made up mostly of young australian players who had not been picked for their state teams and me because i was ineligible as an overseas player. it was a very tough tournament and after 7 full games in 4 days we lost to the victoria state team in the 5th/6th play off on penalties. we did a lot better than most people expected with the team we had, and it was an excellent tournament for me to prepare for the national league and an honour to captain the barbarians. my best games were probably against new zealand and japan where i scored 7 and then 5 goals.

Now i am back in victoria and have a short break over christmas before really training hard until our first national league games in late january. i hope everyone has a good xmas and trains extra hard in the new year to make 2012 a great year for the club.