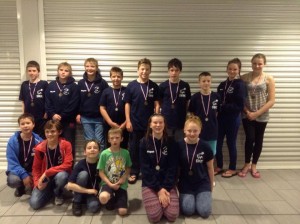 We travelled to Maltby in South Yorkshire on Saturday 29th September for the Rotherham U13’s tournament.

The squad was split into two teams – Green and Orange.

Sedgefield Orange played Yorkshire Champions Rotherham in the final and ran out 8-6 winners.

Sedgefield Green finished third in the group and played off against Castleford for the bronze medal in a tight game won 7-6.

Michael Hampshire, 12, was player of the tournament for the Orange team, being top scorer in the whole competition.

Outstanding players for the Green team were Hollie Turnbull and Kate Harrison, both 12.

Members of the Sedgefield squad were:

The club committee would like to say a massive well done to all those who took part, as well as a big thank you to all the parents for their encouragement and support on the day!