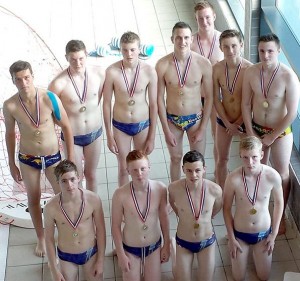 Our club U19 team travelled to Maltby, North Yorkshire for the Northern League Junior Final with a very young team.

The first game was against Bridgefield, Liverpool – where we won a comfortable 10-5.

We played Sheffield in the tournament decider.  The team’s strong fitness levels helped us to win 10-7, confirming we are the strongest club in North of England Junior Water Polo!!!

This shows an excellent performance by our team, more so as we are the only team who train in a shallow pool.

The team was as follows: