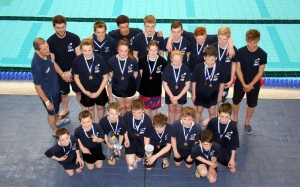 Well done to our 2000+ and 2002+ teams who participated in the National Water Polo Festival in Manchester.

Our 2000+ did really well, and came away in third place.  Fourteen teams competed.

Both teams would like to say a massive thank you to the coaches on the day and also to the parents for their fantastic support and encouragement!