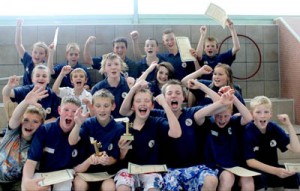 Sedgefield Water Polo Club travelled to the Manchester Aquatic Centre pool where the 2002 Commonwealth Games were held to take part in the Manchester Water Polo Festival. This is the biggest competition in Great Britain for under 13 and under 15 mixed teams.

14 teams entered in each age group from all over GB. Sedgefield confounded everyone to win both titles. A magnificent achievement the first team to ever do this.

In the under 13’s Sedgefield defeated Solihull, Cym Draig from Wales, Manchester, Birkenhead, Chester and Sheffield comfortably in their group games and faced North East rivals Rotherham in the final game to decide the Championships.

This was an extremely close and exciting game which was locked at 7-7 with seconds to go when John Pratt the Sedgefield captain scored a magnificent goal to clinch an 8-7 victory. John 12 had a brilliant tournament scoring 39 goals and without doubt was the tournament’s best player and showed his great potential for the future.

He was ably supported by Jake Plant 12 with 10 goals, Michael Cousins and Connor Keeble both 11 with 2 each. Emily Pilkington and Terri Millington both 12 gave excellent performances in defence. While Luke Curley 10 showed great potential in goal. Making their debut at this level were 10 year old Hugh Masterson, Ben Stephenson 9, and Michael Hampshire 8 and they all showed a lot of potential for the future.

Sedgefield were coached by young coach Greg Barker 18 and this group of young players remain unbeaten as a team.
In the under 15 age group Sedgefield faced Chester, Oldham, Welsh Wanderers, Tyldsley, Manchester, City of Sheffield B and Birkenhead. Sedgefield managed to defeat all of these teams comfortably to take their place in the semi final against their sister club Lancaster.

This was an exciting and hard encounter for Sedgefield who only had one substitute. Sedgefield were behind 4-3 with 30 seconds to go when Joe Barker 13 scored a great equaliser to take the game to a penalty shoot out.

Both teams scored the first 3 each and then Sedgefield goal keeper Richie Howe pulled off a great save to put Sedgefield 4-3 up and then Lancaster scored their 4th one, leaving Ben Turnbull 12 with the last penalty to put Sedgefield through to the final. Ben converted with no problem meaning Sedgefield had scored all 5 penalties. The other 3 had been converted by Adam Courtley 13, James Pratt 13 and Alex Miller 13.

In the final Sedgefield faced Sheffield who had won the other group and defeated Sedgefield’s semi final opponents Lancaster by 6 goals, so Sheffield were big favourites. However Sedgefield coached by International star water polo player Scott Carpenter produced a magnificent inspired performance to comfortably triumph by 4-2 to leave Sheffield shell shocked.

James Pratt was excellent in defence and ably supported by Nick Gowland 14. Joe Barker 13 was Sedgefield’s leading scorer with 21 goals and well supported by Ben Turnbull with 12 and Alex Miller with 8. The Sedgefield goalkeeper Richie Howe showed why he is so highly rated in his age group with a string of fine saves.

Adam Courtley in his man marking role managed to nullify all the oppositions danger men. Holly Short 14 Sedgefield’s only female player supported really well in what ever role she was asked to perform.

Sedgefield who lost out in April on winning the National title in this age group on goal difference have still never been defeated in 5 years. If anyone is interested in playing this exciting sport you can get more details on 07818554449 or sedgefieldpolo@hotmail.com. It is especially attractive for club swimmers.