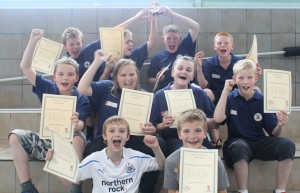 Sedgefield 99s proved unstoppable at the recent ‘Water Polo Summer Festival’ at Manchester’s Aquatics centre organised by Manchester’s Water Polo club. The young team started well against East Manchester with good play by the front line. Team work was lacking on our second game with a lot of individual play allowing the Welsh team ‘Cwm Draig’, who putting up a good defence and strong attack, brought us to a draw. After game coaching paid off with straight wins for the remaining Sedgefield games.

The final game ended up as ‘the final’ as Rotherham reached the last game as clear favourites with four consecutive wins against our three wins and a draw. Sedgefield needed a win, the game was close with Sedgefield’s initial three goal advantage lost over the last 3 minutes of the second half. A last goal by John from the half way mark in the final seconds clinched the match and the championship for Sedgefield, with a chorus of joyous relief shouted by the Sedgefield supporters.

By the third game the team had gelled, with brilliant goal scoring by John (39), with excellent support throughout by Jake (10) and Connor (2) and Michael C (1). There was a good showing by the newer and younger players with Ben, Hugh and Michael H giving strong support. A tough team emerged with Emily and Terri showing a sterling and vigorous defence against strong attacks and Luke doing a great job in defending the Sedgefield goal with determination and courage.

Many thanks go to Greg as coach who gave every encouragement and support throughout the tournament, with Scott giving timely and sage advice. A great tournament with a great result, with excellent effort throughout by all team members and clear enjoyment by all the Sedgefield supporters. Congratulations to every member of the team.