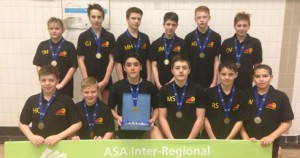 Well done to our players Haydn, Jake, Daniel and Michael H who were part of the North East team who won the National Championships at Walsall on 13th December.

Hosted by the ASA West Midlands region in Walsall, the North East stormed through their group with three wins and a goal difference of +25 before securing the title with a semi-final defeat of Scotland and a victory over defending champions North West Tigers in the final.

Few teams were able to live with the North East’s firepower over the weekend with our own Michael Hampshire ending the competition as joint top goal scorer.

After breezing through the group stages, North East encountered their first big test of the competition against Scotland in the semi finals.  But the North East ground out an 8-6 victory to set up their second clash of the Championships with North West Tigers, who overcame Group B winners London 9-7 in a repeat of last year’s final.

The final was another tense affair but North East maintained their perfect record with a 14-12 win to take the title.