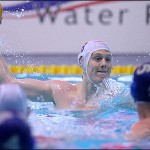 Unfortunately, Scott picked up a shoulder injury in the gym at home, and despite lots of physio, it wouldn’t clear up.  He played the first two games of the National League season in Australia, but was in a lot of pain.  Scans showed damage to the AC joint which meant surgery was necessary.  Scott has now had his operation and is on the road to recovery.  Lets hope he’s back to full strength soon!

Scott’s team, the Tigers won the team of the year 2013 award for doing the double, despite stiff competition from other sports including rugby, cricket and football.  It is the first time the polo team has won it in 20 years, proving what dedication and talent can do!