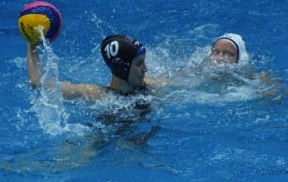 Playing against a physical Canadian side at the Shenzhen Bao’an Natatorium, the British women slipped behind early before Ciara Gibson-Byrne drew level to tie the score at 1-1 after the first quarter.

The Brits began to settle in the second quarter, establishing a 4-3 lead at the half way point. Frankie Snell impressed with a good goal while Rosie Morris made some superb stops to keep the Brits’ noses ahead.

Canada raced out of the blocks in the third quarter, scoring three in a row to take an early lead before the British pulled the score back to 6-6 with a quarter to play.

Snell put Great Britain ahead at the start of the final quarter before the Canadians once again moved a goal clear at 8-7.

Angie Winstanley-Smith, team captain for the tournament, battled hard all match and pulled the Brits level for a final time with 22 seconds left on the clock, finishing a controlled set-up on a man-up.

China eventually ran out 15-8 winners to maintain their perfect start to the tournament but the Brits took credit for their performance in an intense encounter with 18-year old Ciara Gibson-Byrne scoring twice for the second consecutive match.

Playing in front of their home crowd, China – whose team contain 12 of their 13-strong World Championship squad – are hot favourites to take the overall title in Shenzhen and took to the water in front of a packed house at the Bao’an Natatorium.

But the British women are riding high in confidence after their opening 8-8 draw with Canada and burst out of the blocks, pulling two goals ahead before finishing the first quarter 3-2 up.

Influential center back Alex Rutlidge was missed after receiving three exclusions in the opening quarter and China put away three penalty shots in the second quarter to move 9-5 ahead at half-time.

The Chinese added another four goals in the third quarter before the Brits ended on a high to tie the final quarter 2-2.

The British women are guaranteed a quarter final place but a victory in their final group match against Italy on Tuesday could see them progress second from Group A and face the third-place finishers in Group B.