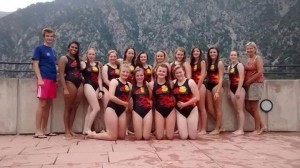 Sedgefield has had a busy Summer 2014!

A couple of days was spent acclimatising to the 38 degree temperature and playing in  open air pools where a couple of friendly matches took place.

Onto the tournament and first up was Zempleni VK( Hungary ) where Sedgefield lost 10-3.

Next up was Watford who Sedgefield beat 6-2.

Szentesi Vizilabda Klub ( Hungary ) were the next opponents where Sedgefield were defeated 15-2.

Beaten by Hapoel Petach Tikva ( Israel ) 6-3, GB Talent then won againgst Kaunas KPC ( Lithuania ) 5-2.  Kris Egginton was 2nd top scorer with  7 goals and Michael Cousins scored 4 and was 3rd top scorer (good news for Sedgefield WPC). A fantastic time was had by all ,so much  so much so that they are talking about going for 3 weeks next summer!

Millfield National Training Camp was next for 5 of our players. 99 age group John Pratt and Emily Pilkington ,2000 Michael Cousins and Kris Egginton and Ben Stephenson in the 2001 ‘s.

Overall finish of 11th place out of 17 boys teams ( was a 99 competition and most players are 2000’s). The Croatians beat the Germans in the final.  Our members enjoyed it so much that they want to go back next year!

(Massive thanks to our ‘Chief Blogger’ Dawn Cousins for this report!)