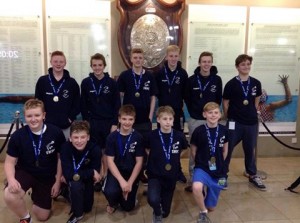 The top 12 teams in Great Britain entered the competition, including some big city clubs.

In their first game, Sedgefield played London Invicta – who had beaten us last year in the Semi Final.  We had our revenge, dominating the game from the start and won 11-3.

We then played Caledonia, which included all the best players from Scotland.  The Scots had a very strong start, leading 3-1 at half time.  After some team changes and a pep talk from coach Richard, we dominated the second half and won 8-4.

Our third match was against South London champions, Sutton and Cheam – a team who were one of the favourites having won may titles at National level.  Our tremendous fitness levels helped us win this game 8-2.

By this stage, we were top of our group, meaning we had to play Watford in the semi final. Watford scored first but we fought back and had a score of 3-3 at half time.  Our defence in the second half was strong and we won the game 6-4.

The final, our first national since 2006, was against Sheffield.  We started the game with a 2-0 lead but then Sheffield caught up before we took a half time lead of 4-2.  The final score was 6- to us.

This is an excellent achievement for such a small club.  Well done to everyone involved.  Your coach, club members and all the committee are very proud of your achievement!