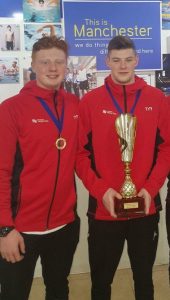 The pair won gold, and lifted the EU Nations trophy as members of the England 99’s men’s squad. Both players are currently training monthly with the born 99’s England Mens squad hoping to be selected to represent Great Britain in the U19’s European Qualification Tournament in May 2018.