UNDER 14 SUCCESS AT NA 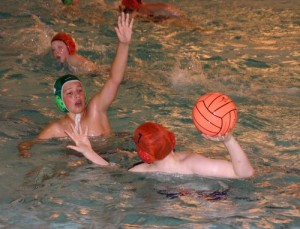 UNDER 14 SUCCESS AT NA

Sedgefield Water Polo Club played an invitation under 14 tournament at Newton Aycliffe Leisure Centre against North West Giants City of Manchester, who have lots of smaller teams in the City feeding into their squad, Carlisle and Scottish Champions Dunfermline.

Sedgefield who included three 10 year olds in the first seven fielded a very young team.
In their first game they were outclassed 7-1 by Dunfermline and it looked like a bad day for Sedgefield. However they showed a lot of grit and determination to defeat Manchester 4-1 in the next game and then defeat Carlisle 2-1.

This meant that they were up against Dunfermline in the final. Sedgefield were a changed team this time out against the Scottish Champions and had changed their game plan which nulified the Dunfermline attack and with a minute to go the game was locked at 1-1. Then Sedgefield missed 2 great chances to win it and Dunfermline scrambled a very late winner to win the final 2-1.

Kris Egginton 10, Connor Keeble 10, and Michael Cousins 10 deserve special mention for tremendous performances in the competition against much older players. Jack Warren 13 made a very promising debut in goal.