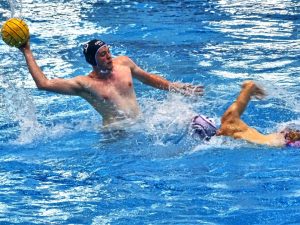 Minsk, Belarus has been a peculiar, yet wonderful host city to the LEN U19 Men’s Water Polo Championship from the 24th August until the 2nd of September 2018.

More incredible than this is that John Pratt, a seasoned Sedgefield player, was a part of the thirteen-man squad that secured themselves a place in the competition after qualifying in May.

Russia was the first match, in the morning of the second day. No goals were scored by the Great British side until the fourth quarter, in which Matt Madden and John Pratt found the back of the goal, in great personal performances. Sadly Britain lost their opening game 19-2 to the Russian side, despite great defensive efforts throughout the match. Whilst disappointed, they stayed thoroughly determined throughout this extremely harsh welcome into the tournament.

Things began better in the next match against Netherlands, with the first quarter finishing 1-1, however the opposition were tough and began an aggressive attack after this first quarter draw. John Pratt was fouled on the five metre line… big mistake! Much like his shot against Russia, Pratt fired the ball and secured a goal with a bounce shot to the left corner. Other goal scorers in this match included Connor Carpenter, Ben Riding and Ben Ray. Although this was another frustrating loss for the team, they reacted with nothing less than perfectly sportsmanlike conduct, which is testament to their character as players.

The Great British U19 men were crushed to go out of the preliminary stage of the Championships with a stinging 24-1 defeat to the Eastern titans, Serbia. This game, if none of the others, served as a way for the GB men competing to fully understand the level they were up against when encountering extremely talented water polo nations.

The team then went on to play the host nation of Belarus in the 13th-16th classification semi finals, after they lost 18-3 to Greece. In terms of goals scored, this was a great game for Great Britain, with both John Pratt and Christopher Sturtevant scoring hat-tricks. This was an extremely tense match with very few goals scored from either side in the first half. Unfortunately the game began to slip away in the tense third quarter of the match and ultimately lead to the demise of Great Britain who lost 13-6 at the final whistle.

In the men’s last game, they faced Slovenia and went into the match with game-faces on willing to sacrifice everything for the match that lay in front of them. Great Britain’s unwavering confidence in the face of defeat is what really made this game compelling; they did not let their heads go down and they went in fighting! The tension throughout the match was palpable with emotional cheers from the crowd and determination in the pool from both sides. In the fourth and final quarter of the game, GB were 7-5 up, one of the best margins in a very close game. However, Slovenia fought back with ferocity and brought the score to 7-7 in the final minutes of the game. A reversal was made against GB with just over one minute to go and upon this, Slovenia cinched am 8-7 victory in their final attack of the match. Tom Hutchins (3), John Pratt (3) and Michael Patterson (1) all buried the ball for GB in a truly nail-biting 15th-16th place classification final.

What must be remembered is that to even lose this competition, the team still had to make it there in the first place, which is no mean feat, since no other GB team has managed it in a decade!

John Pratt, from Coxhoe, Durham, was the top scorer for the Great British U19’s during this tournament, boasting eight goals total. He continuously played with determination, positivity, respect, unparalleled game awareness and pride upon representing his country at such a high level. It must be said that he thoroughly deserved and played up to the opportunity he was given and reminded everyone of his value in the squad. Greece went on to win the tournament on the last day beating Montenegro 14-12 in a fantastic clash of the titans. One may recall, back in May during the qualifiers Britain lost 14-2 to Greece, however this score ultimately allowed them to qualify. No more gratitude could be given to the people that supported John and the rest of the GB team throughout this whole process including coaches Sean King, Andy McGinty, Tom Richmond and Team Manager Collin Walsh, none of whom this would have been possible without.

Thanks to Sarah Davies for writing this article